It was windier today, a 20mph south-westerly was fairly constant all day long. This meant visible migration was not as productive as the last couple of days and the number of Skylarks, Grey Wagtails and Meadow Pipits had dwindled. A Merlin was busy hunting any Meadow Pipits on the south end, other raptors today include, two Kestrels, two Sparrowhawks and two Peregrines.

Solfach was quite active, though. During high tide in the morning waders on the beach included six Ringed Plovers, ten Dunlins, nine Redshanks, 41 Turnstones and a Bar-tailed Godwit! A flock of 12 Black-tailed Godwits flew past the Narrows during the morning too! Four Purple Sandpipers were also present on the rocks around the Narrows, they are often out of sight and only seen if they get flushed by something! 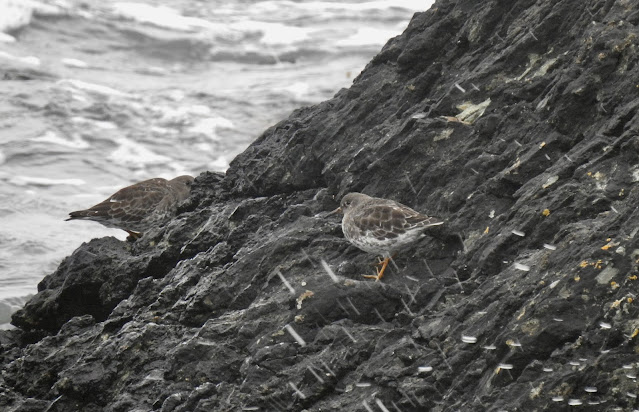 A seawatch took place throughout the morning, and although quiet on almost every front, a very notable passage of 17 Balearic Shearwaters made up for the lack of other numbers! These are the first records in what we were worried was going to be a blank year for this species!

Passerines, as mentioned were not passing in great numbers today, but pulses of Swallows flying south added up to 88 birds. The usual number of White Wagtails were present on Solfach, 41 in total. The highlights of the day were two Whinchats that were briefly seen in the Lowlands before ducking out of sight not to be seen again, the second and third for the month! Only two Skylarks were seen, both on the narrows and 82 Meadow Pipits is a large decline compared to other days this month. Today was, unfortunately, a blank day for Grey Wagtails too, probably due to the change in wind direction.