Rain fell heavily during the night but had more or less cleared by the morning, although dark clouds were threatening throughout the day. The wind was 19 mph from the north-west and had a biting chill to it.
The westerlies seem to be halting migration slightly, and today was even quieter than yesterday for most species, only 19 swallows were recorded today and just 55 Meadow Pipits. White Wagtails were still in decent numbers on Solfach, 26 were counted today, along with 28 Rock Pipits. The sound of Goldcrests could be heard in the Obs garden, and could mainly be seen feeding amongst the three spruce trees, hopefully, we'll be getting some really large numbers of these tiny migrants soon...
Seawatching was not as productive as hoped, 19 Manx Shearwaters, 56 Gannets, 250 Kittiwakes and 24 Razorbills were about the best of it. Three Great Skuas were seen off the South End later in the day, too. 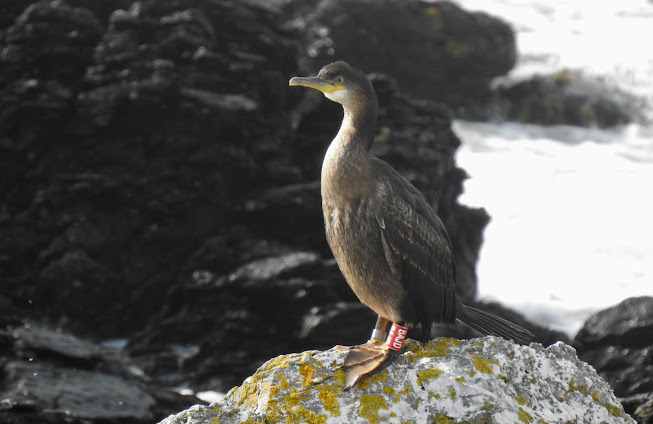 One of our ringed Shags, ringed earlier this year from a brood of three.
There was a good variety of raptors today, two Kestrels, one Sparrowhawk, two Peregrines and a Merlin. these are becoming quite standard species for any given day, but are nice to see, of course. 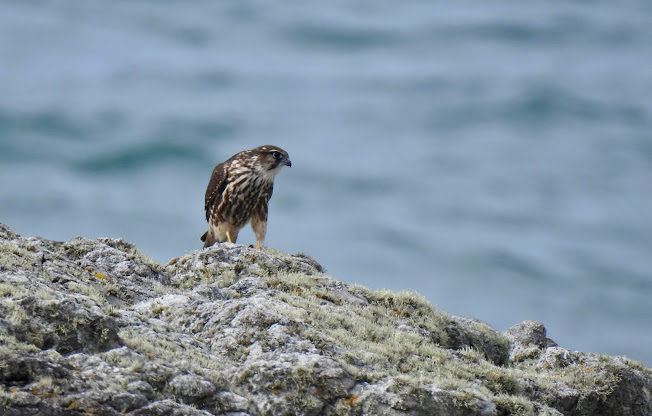 A young Merlin tucking into a pipit on the North End
Waders were once again in decent numbers, 38 Oystercatchers, eight Ringed Plovers, nine Dunlins, one Whimbrel, 43 Curlews, five Redshanks and a good count of 52 Turnstones.
Posted by Sam Prettyman at 07:50