This morning had a fresh breeze coming in from the West, but combined with clear sunny skies, made for a lovely start to the day.

Steve was up and out early and it was more than worth it! Up at Nant, eleven Long-tailed Tits were the first of the year which quickly headed south up the mountainside. In the North West Fields, a Richard's Pipit flew up before heading off South, while out at sea a Goldeneye flew south, both new species for the year too. A Ring Ouzel was present in the Wetlands with a group of Redwings, while a Yellowhammer was feeding in the seed crop planted in the pig field, a scarce bird here.

George and Alex headed up to Nant to open a few nets as there were some few thrushes around. It was slow catching, but an Icelandic Redwing of the race coburni was a nice surprise! The winds had been ideal for a few turning up though, so it wasn't totally unexpected. Otherwise, a few Goldcrests were all.

Later on, nets were again opened at Nant in the hope of catching some thrushes coming into roost. Only three Redwings were caught, but another of these was an Icelandic bird. One net was left open until after dark, and a tape played under the net resulted in a Barn Owl being caught, a real success as this becomes the second one ringed this year! 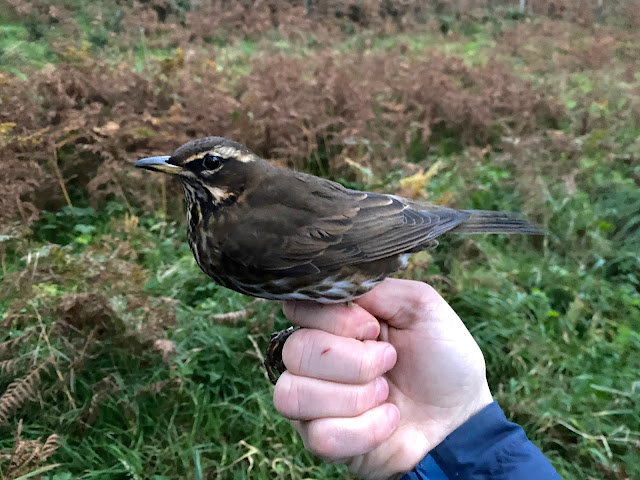 The second coburni was an even more striking bird, being almost totally solidly chocolate brown across the breast and flanks, with dark brown legs too.