A snifter of east wind overnight and we had some nice migration. The floodgates were far from opened, but it was good to wake to the tseeeeping of Redwings overhead.

It was generally a grey old day and out solar panels were struggling to produce enough power again so we had to revert to running the generator to charge the batteries.

The nets at Cristin were opened shortly after dawn and Ed and Steve did a few rounds before Ed had to make a dash for the boat at 10am. Thanks for all the help over the past few weeks Ed and also for finding that vireo!! Lets hope we see you on here again before too long...

Also Staurt and Megan going the departing boat as they headed off for an interview, but not before Stuart had a Barn Owl staring back at him from deep inside Nant Withy!

This means that we are now left with just me, William and Jeff and our President David, to get the census done, and the me doing all the ringing, log, blog etc and all the usual domestics... Blog posts may be a little lighter than usual as a result.

So the nets produced, not masses, but a good run of Redwings - nine in all, a few Chiffchaffs, Blackcaps and Goldcrests. Most unusual were three new unsigned Wrens... quite possibly migrants. 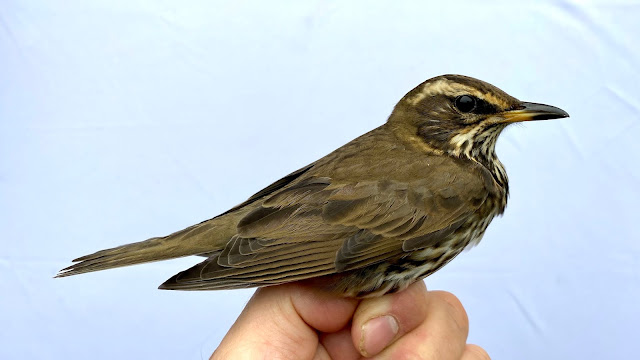 Away from the ringing, 36 Common Scoter were seen. One Buzzard was seen over the Observatory, two Sparrowhawks and Merlin and Kestrel.

Two Water Rails were still in the withies. The wader roost was status quo, with Curlews increasing to 61.

Two Mediterranrean Gulls were with 40 Black-heads and 347 Herring Gulls on the rocks and offshore.

Three Blackcaps, 11 Chiffchaffs and two late Willow Warblers were noted. Magpie numbers seemed higher than normal with up to 66 counted. 166 Starlings were seen in numbers flocks. Not much finch passage though, with just one Brambling at dawn, five Chaffinches, seven Siskins, 38 Goldfinches and 18 Linnets.

A Snow Bunting flew past William on the South End in the afternoon - whether it was last weeks bird or another is under debate!

Once again the moth trap proved fruitful, with some nice species such as Large Wainscot, Yellow-line Quaker, a Satellite (about the 10th record for the island) amongst the usual fare.

As the evening drew to a close we were treated to a cracking sunset. 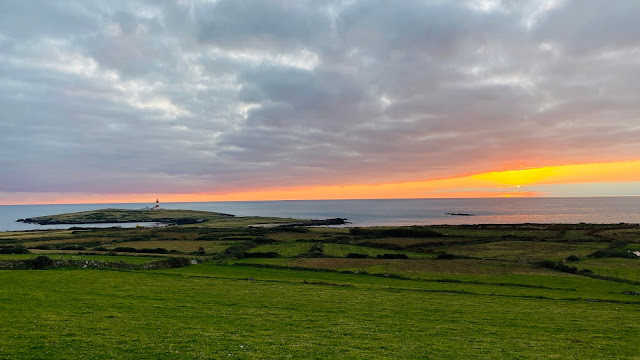 Posted by Steve Stansfield at 11:16