So the wind stayed in the west-southwest and dropped to about 15 knots, calm enough for some migrants to start moving... at last!

The day began with quite a spectacle of many hundreds of seabirds streaming south to the west of the island. there were two Manx Shearwaters, just over 200 Gannets. Eight Mediterranean Gulls amongst the 200 or so Black-headed Gulls, 50 Lesser Black-backs, 150 Greater Black-backs, 500 Herring Gulls and 300 Kittiwakes. Over 200 Razorbills also flew south.

A Barn Owl flew through the Observatory Garden at dusk. A Grey Heron toured the island. There were two Sparrowhawks again, a Merlin was on the South End and a Water Rail was in the withies. 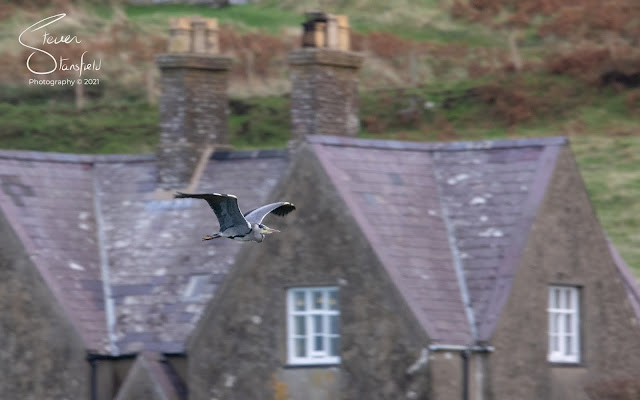 The Great Spotted Woodpecker is still destroying tree sumps in the withies, but one of the highlights of the day was seven Stock Doves seen over Cristin. The Black Redstart was at Ty Pellaf again and 26 Redwings moved through including one trapped and ringed by Stuart at the Observatory.
Eight Chiffchaffs were seen and 13 Goldcrests and the Tree Sparrow was still at Ty Pellaf along with a female House Sparrow.
During the morning many flocks of Starlings passed through the island heading in a general southerly direction. By 'Log o' Clock' the day's total stood at a minimum of 1516.
The Chough flock on the beak was still in the mid-30s as they fed on sand hoppers and what looks like kelp-fly larvae 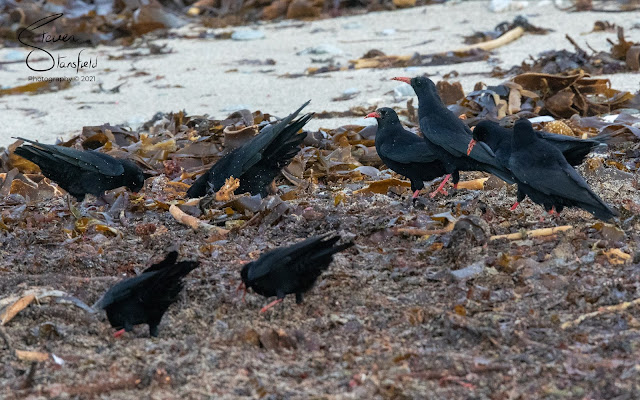 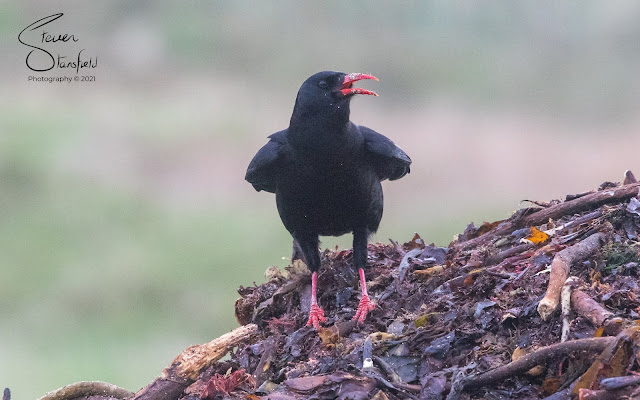 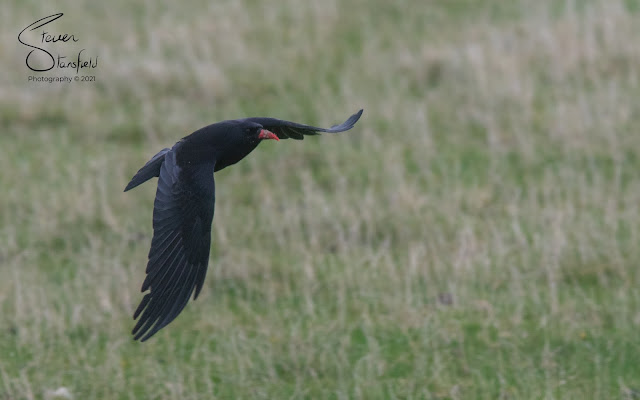 There was also an excellent overhead passage of finches, with 636 Chaffinches seen heading south. There were also a number of flocks of Goldfinches, totalling 123, there were 33 Linnets, 255 Siskins, nine Brambling and 4 Lesser Redpolls, with the star birds being three Common Crossbills over Ty Pellaf Withy.
A Lapland Bunting; the first of the autumn, was seen initially over the Narrows, but later on the South End.
In the afternoon, as Stuart and Megan continued to enter the last of the year's ringing data, Fiona, Connor and I began doing some brush clearance around the solar array. As the sun is no longer getting high in the sky, the panels are being shaded by tall gorse and brambles to the south of the, (or they were!). We spent a few hours cutting back the vegetation and clearing it away. We will need to do more at a later date, but for now the panels can see the sun much earlier in the day!

And finally... after a long and seemingly tiring day we were treated to another nice sunset which Fiona managed to get a few images of.
Posted by Steve Stansfield at 13:33