The persistent south-westerlies continue and show how signs of abating. To this end migration is becoming almost non-existent. The weather did provide for some dramatic cloud-scapes though. 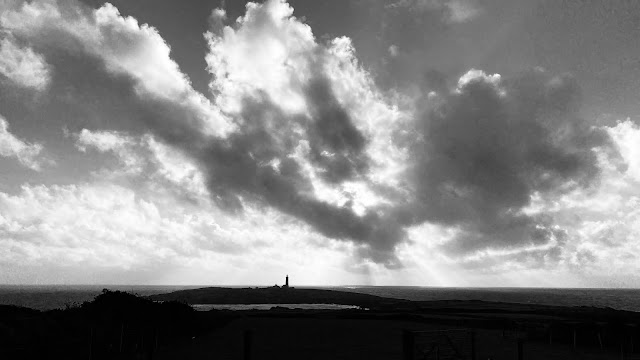 Two Sparrowhawks were buzzing about the Mountain, and a Peregrine was seen in a number of places with a Buzzard hovering over the Mountain above the farm

Not many waders were seen, though seven Snipes were in the wetlands.

The Great Spotted Woodpecker was seen in the withies again and the Black Redstart was seen at Ty Pellaf again.

Two Song Thrushes and seven Redwings were seen. There were five Chiffchaffs and 18 Goldcrests as the warbler season draws to a close.

The Chough flock on Solfach was at 36, and most of the 28 Magpies seen were on the beach before heading to Ty Pellaf. There was a small flock of 17 Starlings on the Bech to.

There we're 25 Chaffinches seen, mostly at Ty Pellaf, six siskin flew over Nant. 12 of the 13 Goldfinches were seen at Ty Pellaf, as were five Linnets and the Tree Sparrow was still present.

Posted by Steve Stansfield at 11:43