The weather first thing made the day feel almost autumnal; a coolish easterly breeze gave the feeling that something could appear on the island. Initial hopes for a late Greenish Warbler or another Rosy starling were dashed, and a wander around the garden at Cristin produced little other than the usual Chiffchaff, a juvenile Great Tit and the burgeoning flock of lost racing pigeons!

There was still a feeling of scarcity in the air, and as Steve left Cristin to head south a chipping green Crossbill appeared from the south and landed initially in the damson bushes south of the Helgoland trap and then moved up into the Sitkas before chipping off northward a few moments later. The farm and Pen Cristin were almost as unproductive as Cristin garden, though many of the resident birds were showing well in the early morning light. A scattering of auks, Shags and gulls were off the east side, and a few Puffins were seen from Pen Cristin. This parrot-billed auk is now evident all along the east side as the colony is continuing to increase.

The area around Traeth Fynnon produced a couple of Stonechats (with the day's total reaching 13 across the island) and a Dunnock, and then a Grey Wagtail flew north between there and the Boathouse - the last of spring or the first of autumn?

Shortly afterwards 86 of the days total of 112 Oystercatchers began to go crazy and in a ball head skywards alerting Steve to a large long-winged flappy raptor heading lazily north over the bay. Its forked reddish tail and fingered wings making identification as a Red Kite very simple. It was a very tatty looking beast, but still very nice to see. It landed briefly on a fence near Pen Cristin before heading around the east side, gaining quite a bit of height and then disappearing off across the sound to the mainland. 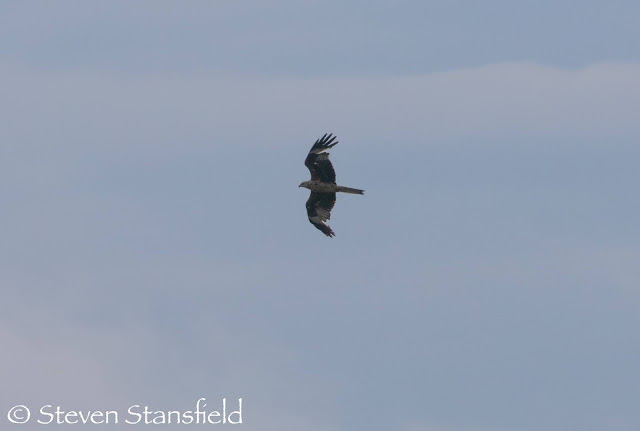 Red Kite and its Oystercatcher escort!

The afternoon was nice and warm and when the sun came out it felt like summer again. The wind had calmed down and it mad it a great opportunity to search the ponds in the lowlands for dragon and damselflies. After the first Blue-tailed Damsels and the year's fort Emperor had been seen a few days ago hopes were high. After 20 minutes at Pwll Cain, two blue tails were seen, and then another 20 minutes at the smaller ponds near Cristin With, a further ten Blue-tails were found, but alas no larger dragons! Heading through the fantastic flowery meadows full of Orchids, two more blue-tails were found along with the year's first Common Blue Damselfly - a nice adult male. 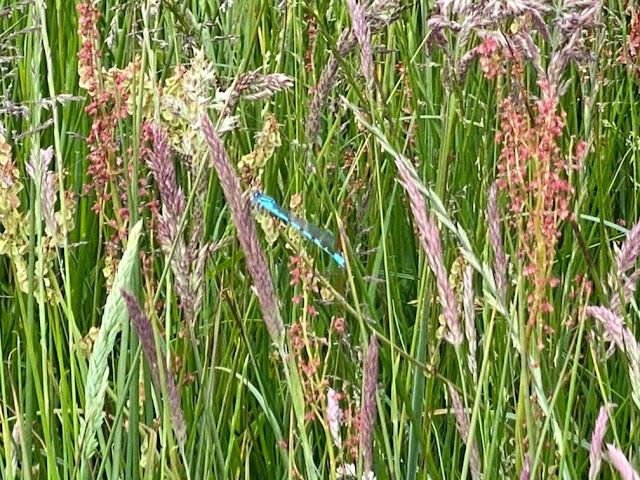 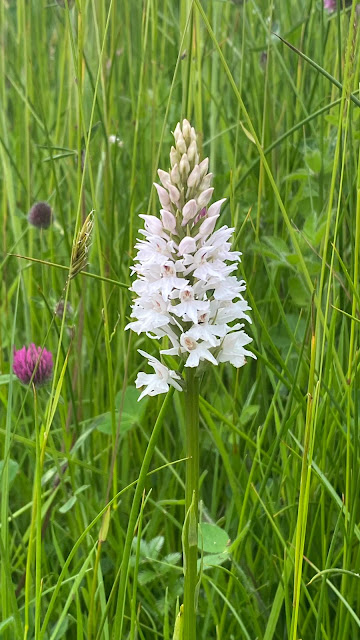 Other sightings - Six Sedge Warblers, one Whitethroat, two Chiffchaffs, one Blackcap, one Willow Warbler, three Curlews, 350 Manx Shearwaters, nine Collared Doves at Ty Pellaf, nine Wheatears and two Siskins. Late in the day we found that one of the guests staying at Ty Nessaf saw a female Restart in the garden there in the late afternoon.

Posted by Steve Stansfield at 19:47